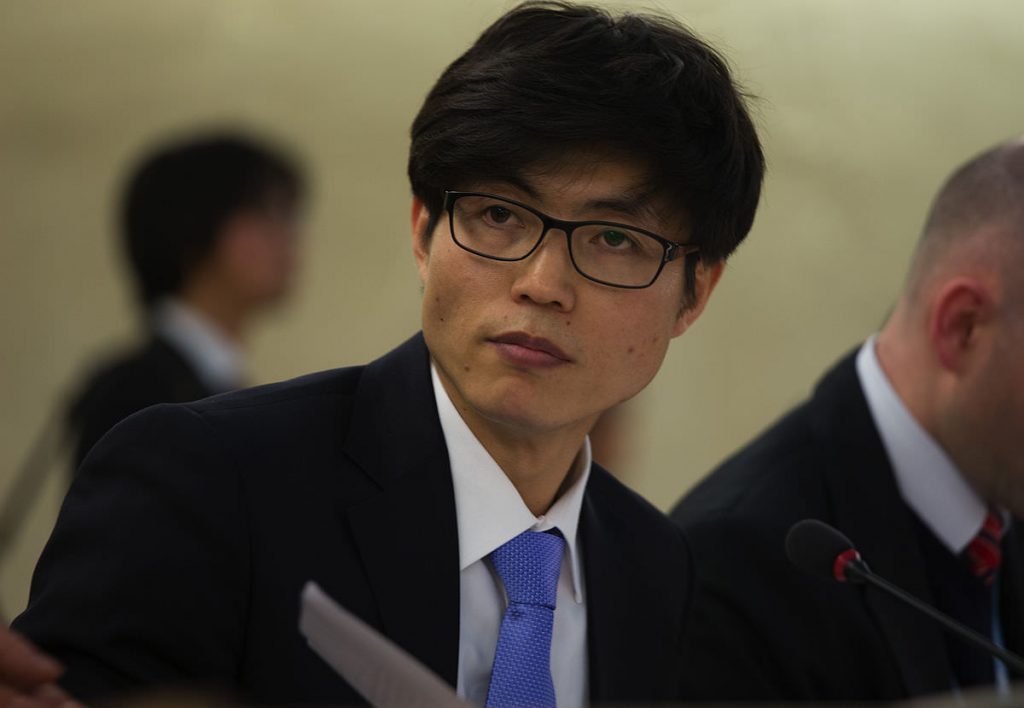 I believe that personal stories are the way most of us connect with the greater tragedies and joys of the world around us, because it was my own mother’s stories that inspired me to learn more about Korea and write about it.

In 2009, I discovered films online about a young man who escaped from North Korea at age 23. Shin Dong-hyuk was born inside the worst of North Korea’s prisons—a life-sentence camp that housed recidivist political dissidents. The hard labor of a man and a woman was recognized with a “reward marriage,” and from this, Shin and an older brother were born, after which his father was separated to work in the mines. Shin’s life circled exclusively around hunger, avoiding beatings and following rules. Because families of criminals are punished for three generations, Shin was born into a death sentence. He was taught to read and write at the school camp until age 12, but since “lifers” were considered irremediable, he was not indoctrinated with the cultish political dogma of Kim Il-sung, Kim Jong-il, and Kim Jong-un, infused into all other North Korean children and adults.

When Shin was nine, his mother and older brother escaped. Shin was tortured every day until the escapees were captured several weeks later. In one film he shows the scars on his back from being hung by his hands and feet over open flames. He was forced to witness the executions of his mother and brother.

In fall 2005, Shin was assigned to work with a new political prisoner from Pyongyang. He was ordered to report the subversive, treasonous things the new prisoner might say. But the man from Pyongyang treated Shin with the unmistakable kindness of sharing half his rations. A child of the prison, Shin had always believed what he was told—that he was deserving of punishment—but now Shin listened to stories about life outside the prison. He heard about an abundance and variety of food and how people could come and go at will. He repeatedly asked the man from Pyongyang to tell those stories. Shin, who had never before thought of anything outside the camp, who never even knew the concept of freedom, attributes these stories to his decision to escape.

Several months later, when an opportunity presented, they agreed to run for it. Shin led the way but stumbled, and the man from Pyongyang was first to leap between the lower two wires of the electrified fence. Shin smelled a terrible odor of burning flesh as he threw himself in the gap opened by his friend sprawled on the bottom wire. He felt searing pain as his legs caught the upper wire. He ran toward the far woods assuming his friend was following, but when he reached tree cover, he saw he was alone. He waited late into the night but his friend never appeared.

Feeling guilty but knowing his friend’s outcome was hopeless, Shin found a village. He joined a band of rag merchants and journeyed northeast to cross the border into China, as the man from Pyongyang had described in his stories.

South Koreans ask if he was awed to see the modern bustling city of Seoul. But for Shin, when the sun rose the morning after his escape, the most shocking vision was how people walked about freely, wearing clothes of different colors, exchanging paper for food. For several days he remained in a state of shock at these three facts.

I was struck by how the man from Pyongyang’s storytelling so utterly changed Shin’s life that he has both published his memoir in South Korea, has had a biography written about him, and is now an outspoken advocate for North Korean refugees. It gives me new wonder at the power of storytelling, and recalls in a much smaller way how in telling my family’s stories through my novel, I connected to cultural history and to being Korean American with an extraordinary richness. It is a rebirth of changed identity inspired by storytelling that echoes Shin’s far more powerful rebirth.

Link to a Google Map I drew of the prison camp he escaped from.